City prioritises investment and job creation through regeneration of Bellville as second CBD.

With the Bellville Future City Project, the City will harness closer working relationships and collaboration with the


rail agencies Prasa and Transnet, and other key stakeholders in the revitalisation of the CBD.

The vision of developing Bellvi lle as Cape Town's second CBD has been discussed for a long time and today, we are taking concrete action.

We are establishing strategic forums to engage academic institutions, the business sector and civil society, which will assist our short, medium and long-term goals of revitalising the Bellville CBD,' said the City's Executive Mayor Dan Plato.

Despite the impact of Covid-19 on business and employment, the Bellville CBD has remained resilient in these difficult times, and is well-placed to experience rejuvenation and growth.

The Bellville CBD has a different DNA to Cape Town CBD, which relies heavily on office

Also, the Bellville CBD has traditionally been a transport funnel via the Voortrekker Road Corridor, connecting people to industrial and commercial areas across Cape Town, including nearby industrial nodes in Bellville Industria, Parow, Goodwood, Durbanville, Brackenfell, Kuils River, and Kraaifontein.

Cape Town continues to experience rapid urbanisation as people relocate to the city in search of opportunities and better lives.

It is true, however, that Bellville has suffered from a prolonged period of decline.

This has impacted negatively on the area's attractiveness as an investment destination.

A key part of the revitalisation will include the establishment of an Innovation District to facilitate increased investment in the knowledge economy, and sharing strategic information related to policy development and planning.

The second forum will comprise of the business sector, which will assist with the regeneration by directing investment through the Innovation District.

The Greater Tygerberg Partnership will be assisting with the implementation of the project, as a city-linked body.

On 29 January 2020, in tabling the City's Adjustment Budget to Council, I announced that the Bellville CBD project would be a legacy project as part of the Mayoral Visible Service Acceleration' (MVSA) initiative.

The Bellville CBD is included in the R200 million MVSA project focused on urban renewal projects in 23 precincts across the city.

Implementation of the MVSA started at the end of last year.

Overall, up to 80 projects to upgrade community facilities and infrastructure, have been identified for funding and execution.

In Bellville, the MVSA initiative is also a precursor to the overall rejuvenation of the area,' said Mayor Plato. 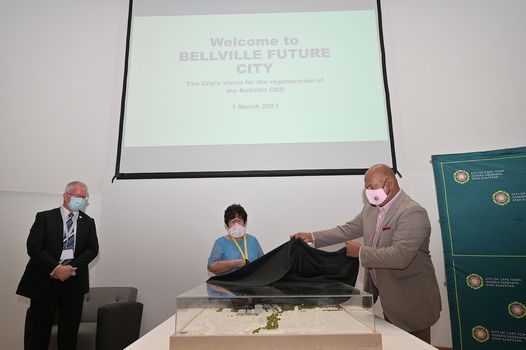